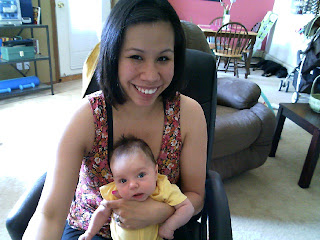 We were weekend warriors. In addition to some long walks around the lake, a trip to the dog park, and a Target run, we also picked up a new computer (after much deliberation). It might not sound like a super full weekend, but when toting around a five-week-old baby, it was productivity of the highest degree.


What’s even better is that we fixed (or rather Joe fixed) our slanted desk that used to be home to a lot of miscellaneous papers and the lap top which frequently featured the blue screen of death. We did some cleaning and some rearranging, so now we have a pretty slick office nook complete with a new printer and new speakers. I should have done a before and after photo, but the before was too embarassing to document.


And what’s even better is that we now have skype abilities! Now, who would like to talk to us?