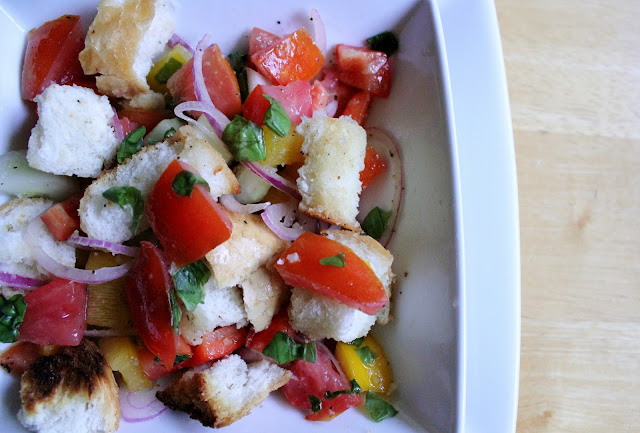 Maybe it’s just me, but recently I’ve seen Panzanella all over Pinterest and the blogs that I regularly stalk follow. It just keeps presenting itself as a tasty end-of-summer dish. It’s basically an explosion of fresh veggies with crunchy bread and a punchy vinaigrette dressing. I’d been wanting to use our garden tomatoes for something different and a little special, so this seemed like a great vehicle for them.

There are many variations of Panzanella, but I ended up giving this recipe a try. I omitted the capers though since I have mixed feelings about capers. I don’t how it is considered a “quick” recipe when it honestly took me a half hour just to chop all the veggies. But, an hour later, Panzanella had been made and it was DUH-licious!

Let it be known that all of this cooking jazz does not come naturally to me. When Joe and I first lived together, everything we ate came out of a box and had some sort of seasoning packet.  And the amount of frozen pizza we ate was nothing short of extraordinary. I never thought I’d be a gal who would even attempt making her own sauces, rubs, vinaigrettes, etc. But I AM! Is it weird that it was empowering to make my own croutons today? It is? Ah, well.