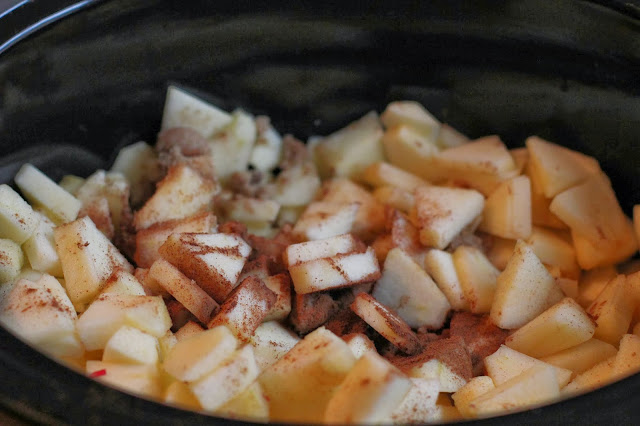 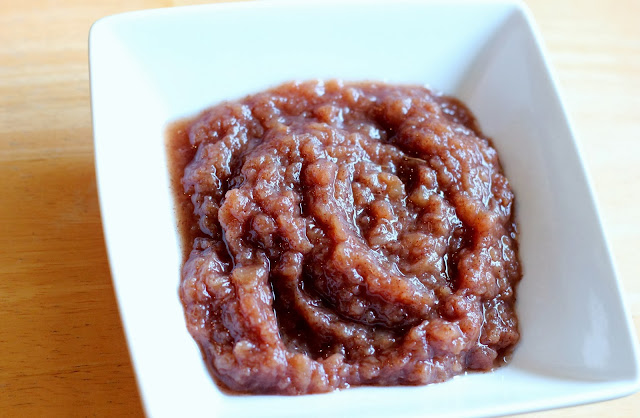 My last food post was months ago. I’m due for one!
I have not been that adventurous in the kitchen as of late. We are living in the land of chicken nuggets and grilled cheese as I’m trying not to make special side meals for Cece and to get her to eat what we are eating. Of course, what is actually happening is that Joe and I often end up just eating whatever she is having. We both like kid food so really it’s not a huge sacrifice.
I’ve found that I’m becoming a bit like my parents in the way that they would realize they were serving us a meal with no legitimate vegetable and ended up scooping applesauce on to our plates. Here. Produce. Bam. I figured I might as well make my own and feel fancy about it. Plus, I have a tiny and loyal kitchen helper who makes cooking a lot of fun.

The applesauce turned out extremely tasty (especially served warm), much richer and more flavorful than the store-bought kind. The color is also completely different. I would double the recipe next time. This made about enough to fill one large Tupperware (or two-medium sized Mason jars… pretty exact measurements, right?). And just so you know, your kitchen will smell UH-mazing as it cooks.

Here is the original recipe. And here is my loose adaptation:
Ingredients
Directions
1.  Peel, core and chop the apples. Place in slow-cooker.
2.  Add the sugar, lemon juice and cinnamon (Cece added all of these things very liberally).
3.  Set slow-cooker to low and cook for 6 hours. Stir apples occasionally, apples will slowly become sauce.  Use an immersion blender to blend until smooth. If you prefer a chunky sauce (which I do), leave sauce in tact.

4.  Can and process as you would other recipes or keep refrigerated up to 3 weeks.