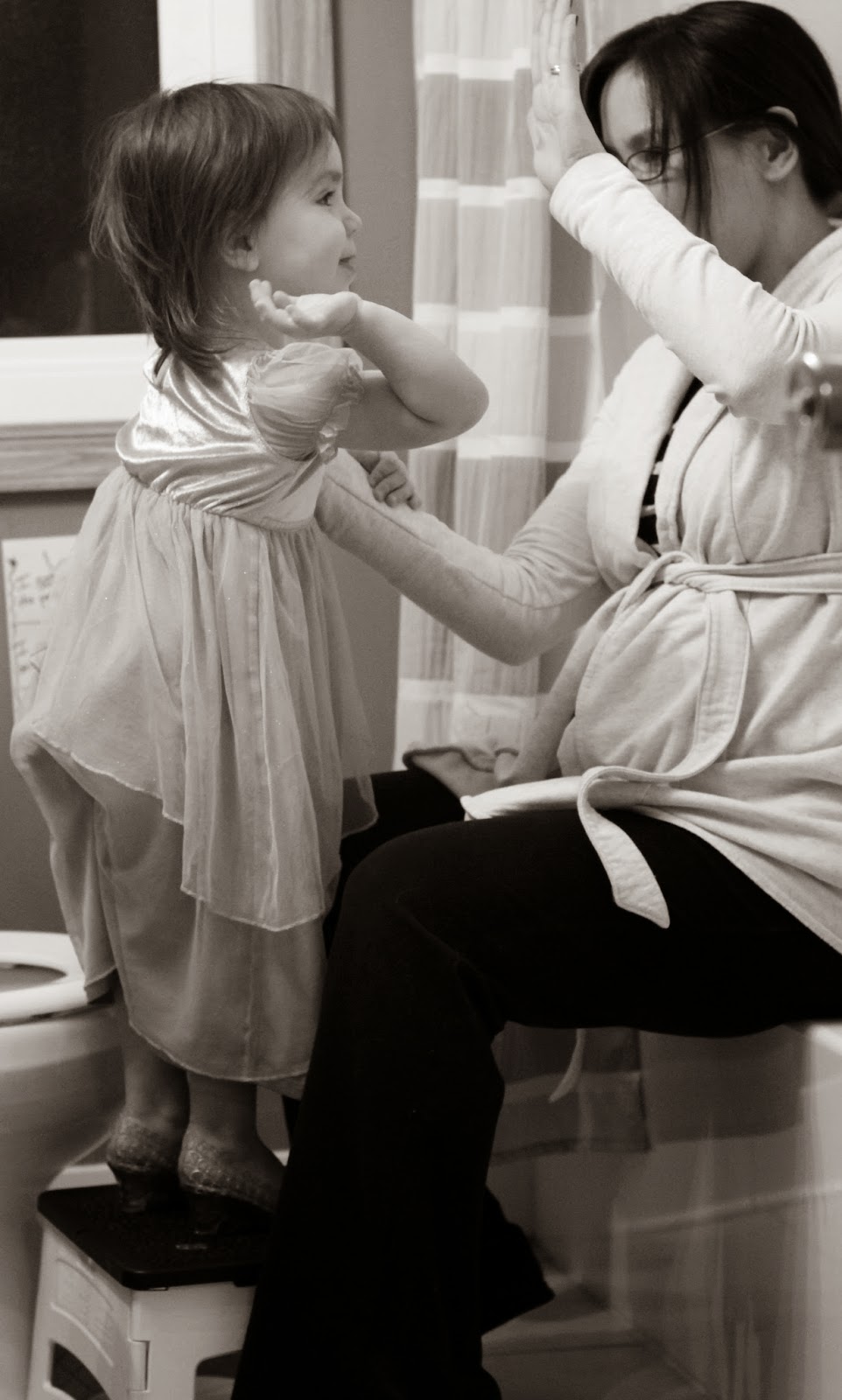 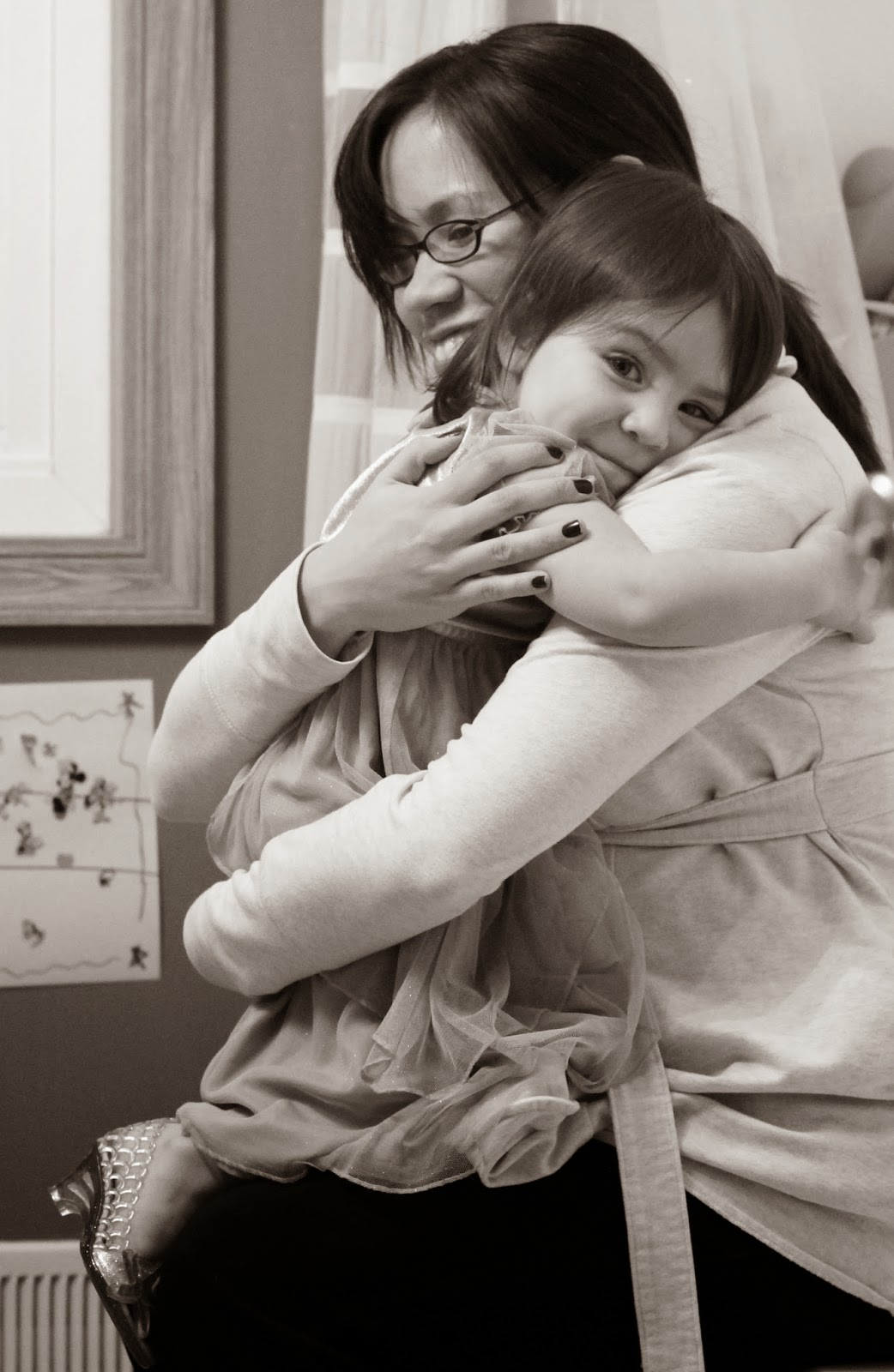 Potty training has been on my to-do list for about a year and I have always been too happy to find excuses/reasons to keep NOT doing it. Finally, it hit me that we are going to have a new baby here in possibly less than six weeks, so the situation began to develop a “now or never” feel to it. Plus, so many people had been telling me that’s she’s ready for so long, I felt like I needed to just have faith and try.
Thus, one week ago, we got rid of all diapers (only wearing diapers at night and not during naps) and just went for it. One reason I’ve been dreading potty training is not because of accidents, but because I knew it was NOT going to be an intuitive process for me, especially since C is quite smart and has a strong personality. It’s not as easy as “Have stickers and treats and be happy with no more diapers!” (Although Joe mentioned that he wouldn’t mind having a sticker chart for himself…)
The first couple days were pretty much just accidents, although she didn’t really fight me about using the potty. The second couple days were more frustrating as she would not have accidents but refuse to go at ALL (which, of course, had me worried about bladder infections and such). Every time I mentioned the potty or sat her on the potty she just cried and cried and even said “CECE DON’T LIKE POTTY!”
Even when she had success with the potty, she would still cry. Even with ample encouragement and us bribing her to high heaven with treats, still crying. (And then I would end up crying too, feeling like a sucky parent for making her miserable and for feeling like I was putting all my time, effort, and energy into something I was clearly was very bad at.)
I felt like I was living the movie Groundhog Day as everyday felt the same. Freezing cold weather, barely leaving the house, focusing on the potty inside, and Cece refusing to wear anything other than her new princess dress for the past seven days. Yes, all the days of always being in the bathroom were blending together. Fortunately, my mom made an impromptu visit last week and it felt great to have some company and support. Instead of being a gracious host, I was the most emotional and least composed version of myself, but I think she understood where I was coming from.
Over the past couple days, I think the whole idea began to click more (I also had to keep reminding myself of the CTFD parenting mindset). She was crying less about the whole thing, was hardly having any accidents, and successfully using the potty a few times a day. I still had to be washing her princess dress quite frequently because of any accidents that did happen. Yesterday, while I was explaining to C why she couldn’t wear her princess dress until it was clean again, she volunteered to sit on the potty herself and then told me “I do my best.” And then my heart melted because I realized that she WAS doing her best. And I realized that even though this has absolutely been one of my hardest weeks ever as a parent, I love her more than I could ever explain. Then she proceeded to use the potty successfully and not cry.
Although it’s been one week of no diapers, I wouldn’t declare us potty-trained yet. HOWEVER, she has woken up dry from every nap and woken up dry every morning except once in the past seven days. We’ve even been out of the house a few times (Target, the library, and even out to dinner) with underwear and with no accidents. Even this morning, we’ve been to the potty twice with success and now she’s napping. So even though we might be considered late when it comes to potty training and slower learners when it comes to the process, I am incredibly proud of how far we were able to come in one week. Honestly… at the moment it feels like a bigger accomplishment than graduating from college.

P.S. Thanks Joe for taking photos of us in the bathroom without batting an eye or asking questions!